I just started my clinical trial of CC0-220 (whatever that means) today. I will be taking this drug orally for the next 21 days and then I have 7 days off.

I can't say that I am thrilled. I was hoping to get a trial that combined this drug with Velcade. There are four "cohorts" and I got the one with Dexamethosone, but no Velcade. Also, I would rather be on the treatment from a year ago, but I am not. Long story there.

Before starting this clinical trial, they provided me with a "consent form". In the consent form, there was a list of possible side effects - 8 pages of side effects. I kid you not. Eight pages. Most of them, I already have to some degree or another.

This morning, they did a preliminary blood draw in "Laboratory Services". I then had an exam with a nurse practitioner on Floor 7. I then went to "Infusion" on Floor 6 where they gave me IVIG. They gave also me the 10 Dex tablets and drew 12 vials of blood and then gave me the actual CC-220 drug. Next they will wait 3 hours, draw more blood then wait another 2 hours and draw still more blood. That will be the end of the blood samples for today, presumable because by then I will be completely empty.

I have always previously been treated on Floor 7. Treatment for this clinical trial is on floor 6. I feel like I have been demoted. Plus my favorite nurse is on Floor 7. But the floor 6 nurses also seem very nice, though it might take them a while to get used to me.

On the bright side, they have a candy bowl on Floor 6..

So, now Barbara and I have 5 hours to kill while they watch me in case there are disastrous side effects. So far so good. I am using my time to process email and work on the cancer blog. Those on the joke list will also most likely benefit.

Have a great Thanksgiving everyone.

Apparently, I have been accepted for a new Clinical Trial.

This one is called CC-220 and it is a clinical trial for a drug called Iberdomide. It is in the same family as Revlimid, but lots more potent. Revlimid is one of the drugs that worked so well in a cocktail So we are both hoping that this new thing will work for me.

There are four "cohorts" to this trial. Each gets several helper chemicals to go along with this. I have not yet been assigned to a cohort. This assignment will be random.

So today I was screened Here is how my screening day went.

So, that is today. Yesterday, we visited Mass General. I wanted a second opinion, so my primary care doctor set this up. I had been upset because I was "between treatments", my numbers where high and getting higher, and I feel that the cancer was/is damaging my body. And I was not getting any treatment. After meeting with this the lead MM doctor at Mass General, I have come to the following conclusions:
So, how am I feeling? ? Not bad, but I have a pain at the base of my skull that troubles me. It seems to be getting worse over time and I am worried that it might not be reversible. This is the main reason that I am so upset at being "between treatments" for so long. My oncologist says that he will order another MRI in a few weeks.

But, if all goes well, my new regimen should start next week. It will be a month or so before we know if it is doing anything for me.

Meanwhile. my oncologist asked me about my other symptoms. I told him that the "peripheral neuropathy" in my feet seems to be getting worse. I have been applying cocoa butter twice a day, but he suggested that I start using a mixture of Cocoa Butter, Coconut Oil and Shea butter. On top of that, he wants me to mix in some Frankincense. Seriously? I thought frankincense went out with the Three Wise Men. Next they are going to ask me to mix in some myrrh.

So, that is a lot to report. I tried to keep it as brief as possible. I will update once I know more.

On Wednesday Barbara and I spent 8 hours at Dana-Farber (DF).  During our visit, I got an EKG and an IVIG infusion.

We were supposed to meet with the oncologist at 2:45. We met at 6:45.The oncologist is recommending yet another clinical trial. They have not yet told me too much about it - like when it will start or how often I will get treatments. There are several "cohorts" in which I might end up some requiring two visits per week to Dana Farber. We will see what happens.

Given that my M-Spike numbers are pretty bad and getting worse, I am anxious to get started. 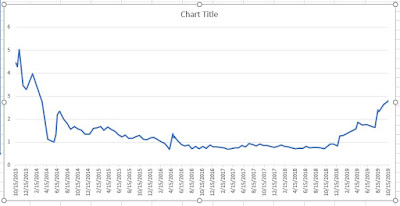 We have gotten used to these long visits to Dana Farber with lots of waiting. We spend the time on our phones and I bring a computer and sometimes watch Netflix. However, first thing on Wednesday, my glasses broke. One lens fell out of the frame and I was not looking forward to entertaining myself with one eye closed. But wait !!! I'm and engineer. I should be able to fix this, right?


For those of you who sometimes wonder if I am a "geek", you will now know for sure. Here is how I "fixed" the glasses: 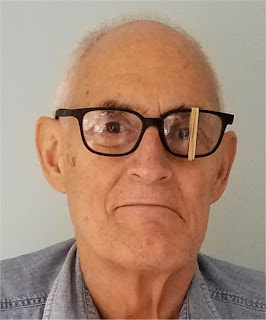 Yup - that's right. I walked around Dana Farber wearing glasses that had been "fixed" with a rubber band. Surprisingly, I was able to see fairly well with the rubber band in front of that eye.

I also had a bit of luck last week. I will leave it to you to decide if it was good luck or bad luck.

Several weeks ago, while visiting Lake Region General Hospital (I don't limit my business to only Dana Farber), I noticed a "ghoul" in front of the gift shop. Knowing that Barbara likes Halloween decorations, I invested a dollar in a raffle ticket to win the ghoul. Perhaps I was the only one who entered, but I won. The woman at the shop asked me to get it as soon as possible because she was very sick of looking at it. Apparently, they had forced her to move it into the shop because it was reminding hospital patrons of why they were at the hospital; it looked too much like the "grim reaper". But Barbara loved it. We brought it to Fox Hill Village to add to their decorations and set it up outside the dining room. 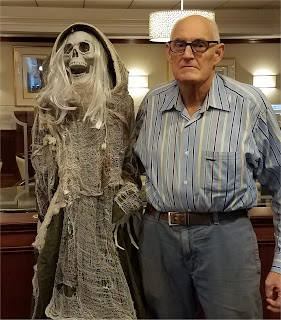 Here is a photo of me with the ghoul. I am the one on the right.

So, that is the report. I will send more as I learn more.