A Meeting with the Oncologist

I met with the Oncologist at the beginning of this cycle. What's is unusual about that is that it had been more than a year since I had met with the great man himself. No need really, since there had been no significant changes in my situation.

But in fact the side effects have been slowly getting a bit worse - month by month. Still not too bad and certainly nothing I can't handle. What worries me most is that the numbness in the bottoms of my feet have been working up to the tops of the feet and now to the area up to my sock line. Well - the feet aren't totally numb. They feel like I have a sock on all the time.

And there has also been a bit of tingling in my hands.

I wanted to ask him about the possibility of trying a reduced chemo dose to see if that lessened the side effects or the response to the medication without reducing the response too much. I figured that if my numbers went the wrong way after the chemo reduction, we could always go back to the old chemo dose, right?

He did not like the idea. He said that sometimes going back to the previous dose does not get the same response that it gave before the reduction. I guess I will take his word for it, but I will say that when I was in the hospital with a bacterial infection a few years ago, they did not seem to hesitate at all in taking me off chemo completely for a couple of weeks. Sure, my numbers went up, but they came back down again once I went back onto the chemo. But he said that does not always happen.

What he did say is that I should treat the symptoms. He suggested that when I get my Velcade, that I also get a full liter of saline instead of a half-liter. He suggested increasing my hydration. He told me that I should use Queen Helen cocoa "oil" instead of the Quene Helene cocoa "butter" that I had been using on my feet. He said it would absorb better into the skin. I don't know about that, but I can say for sure that it absorbs immediately and permanently into the carpet when it drips.

So, is this helping the side effects? Well, it's probably too soon to tell. I don't they they are getting any worse, but so far, they don't seem better either.

So, I am staying the course. I start cycle 73 next Wednesday.

Meanwhile summer in New Hampshire is drawing to a close. Boo-Hoo. It goes so quickly.

This year we bought a new boat. A "Party Boat". Barbara loves it. We can actually just walk onto it without risking our lives. We like to take it out at sunset for a picnic while underway. Very nice. Great for sipping wine.. Also, unlike the previous boat, this one starts. 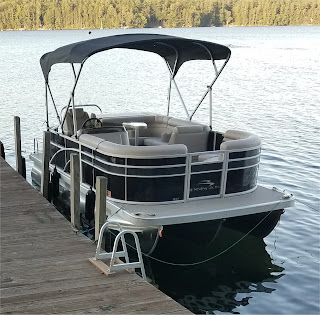 I am still trying to learn how to dock the thing. I put small dents in it during my first two dockings, but have not caused any more damage since then - either to the dock or the boat. My ego is another story.
Posted by Warren at 4:41 AM No comments: