Tuesday was our 25th Wedding Anniversary. We celebrated by inviting a few neighbors over for cocktails and hors d'oeuvres (which many of our guests kindly brought themselves). We set up a bar and had a grand time.

Barbara really wanted to have the celebration on the Granite Patio in front of our "Boat House" which in fact is not actually a boat-house, but that is another story. Barbara spent days getting it preped. She pressure washed the granite. She went into the boat-house with a pitchfork and a rake to do battle with the spiders. She raked down spider webs and cleaned spider poop. And then she started the real cleaning. I felt so bad for her slaving away down there that I seriously considered going down to help.

Of course it started to rain just before the party was getting underway, so we had to move the whole thing up to the big house.

But not for long. The rain eventually stopped and we forced everyone to grab their drinks and something from the serving table and head down to the water.

It was great. So great in fact that when it started to rain again, people toughed it out; it was only a light sprinkle anyway. We were all rewarded by a half hour "rainbow show". Spectacular. It was a great evening. 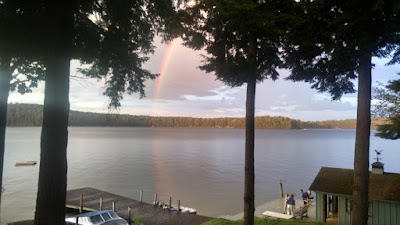 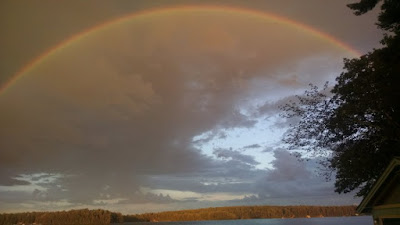 In proofreading this it occurred to me that a bad typist such as myself could easily get into serious trouble spouse-wise by exchanging two letters in the word "Marital" to make it "Martial". When will they have a spell checker that finds errors like this?

During the last week or so, we had the chance to get together with at least three sets of friends that we have barely seen over the last 20 to 35 years. I don't like to "name names" in the blog, but if you were one of these people, you know who you are and you should know that getting together with you was a real highlight.

Our boat is in the water and running. You have no idea how unusual this is. You may recall that it did not run worth a darn last year. Because I had already replaced almost everything else in the engine, I decided that the problem was bad fuel. I worked for over a week trying various methods for getting the old fuel out. Eventually, I used a small hand pump which took me a few hours of pumping, but eventually emptied the tank. I then drove to the airport (in my truck - not in the boat) and bought eight gallons of hundred octane, ethanol free aviation fuel. I figured that if it wouldn't run on that, then it wouldn't run on anything. But it does - so far at least.  I am keeping my fingers crossed.

Last week, I spent some quality time in the workshop making wooden bowls out of some of the ash tree that the utility wire guys had dropped on our property. I had one very deep chunk of wood out of which I made my most spectacular bowl yet. I made it with a sort of pedestal and I was very proud of this. I had spent several hours on it.

Within days, the bowl developed huge spits.  I should have known better than to have included the center of the tree. Fortunately, I had purchased some special epoxy stuff for dealing with cracks like this and I managed to repair the damage. Then the bowl split again - even worse than the first time. l guess I will wait a few months and then maybe try again. Meanwhile, I have learned a real lesson about what part of the tree to include in the bowl - especially while dealing with green wood. 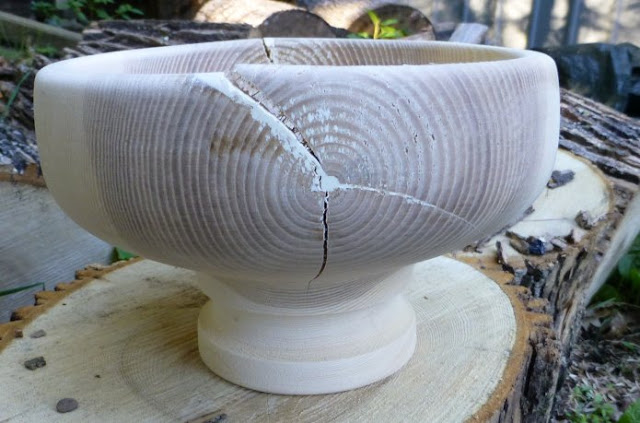 I have two tiny garden parcels which I tend from time to time - one at Fox Hill Village and one in Meredith. Both are now producing modest harvests. We got some nice tomatoes from the one in Mass and a whole slew of yellow wax beans from the one in Meredith. When I returned from the garden this afternoon, Barbara asked, "Is that a zucchini in your pocket or are you just glad to see me?" Sadly, it was in fact a zucchini.

I guess I should include a few words about the Cancer. But before that I want to share a thought that might be relevant to any readers who take a lot of pill, especially if you wear glasses. Don't let this happen to you.

Last week, I happened to notice a pill on my desk at Fox Hill. I figured that I must have dropped it at some point while taking part of my daily dose. As I was about to take it, I realized that it did not look quite right. There were four small holes in it. It turns out that it was actually a button that had popped off one of my shirts.

But back to the disease. I continue to take things one 21 day cycle at a time. You may recall that last cycle, the numbers had dropped a bit. This cycle, they were back up to where they had been the cycle before. Not as good as we had been hoping for, but it could have been worse. I choose to think of it as holding steady.

And the side-effects continue to be quite manageable. I have been somewhat tired lately. The peripheral neuropathy continues to increase slowly in my feet and seems now to be spreading to my ankles, but again this just feels weird without causing any real discomfort or difficulty. There is another issue which delicacy prevents me from discussing in detail other than to say that Imodium might be helping.

So that is for this report. We hope that all is well with all of you and that you are enjoying this glorious summer. Sure has been beautiful here at the lake, but the season is to darned short.

Posted by Warren at 4:35 AM No comments: