It has been a while since my last posting, but even so, there is not all that much to report – at least from the Cancer Front. Today, I write this from Dana-Farber where I am starting cycle 22 for this regimen. You may recall that each cycle is 21 days, so that is 63 weeks. So far, my numbers are holding fairly steady – or possibly dropping slowly. That’s good.

Here is a photo of me at my last “infusion”. They are supposed to give me saline, but as you can see, I talked them into something a bit stronger. 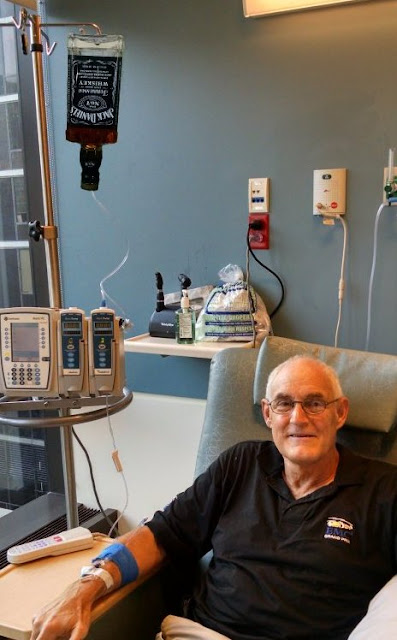 In August, I went on a big adventure - at least for me. My brother Ron was taking his son Weston (aged 10) on an RV Camping trip to Yellowstone. He invited my brother Ken and me to join him for the second half of the week. My doctor told me that if I fly, I should arrange to sit near the front of the plane where there are fewer germs. So I paid for “Comfort Class”. It was nice because there was actually room for my legs. It was my first flight in over two years.

Yellowstone was a blast, though I did not take all the hikes that everyone else went on. The first day included a walk down into a canyon to get a better view of Yellowstone Falls. There were a lot of stairs, but I figured this would not be a problem since I have been regularly doing 12 flights at Dana Farber supposedly in order to raise my white blood count in order to "qualify" for treatment. I figured it would be the same thing. And it was – except for the fact that Yellowstone is at 8,500 feet. Altitude does matter. But I made it. Eventually.

It was a great trip and the four of us had a grand time with lots of “campfire time” and not too much snoring in the RV.

We did run into an interesting problem at the Mud Volcano. They have raised walkways with rails to prevent people from walking where they should not. Ken is quite a photographer, but dropped part of a lens off the ramp. There was no way we could reach it – not even with my simian arms. We were searching for a net or a hook or something, but then we realized that we had a perfectly good 10 year old that was not being used for anything. Ron simply lowered him down by his ankles until he could grab the lens part. 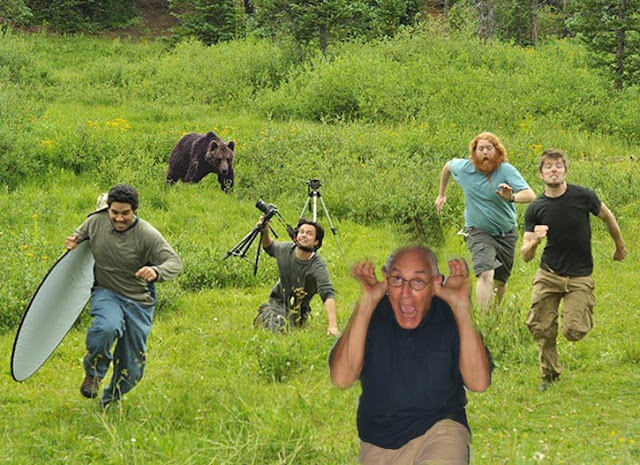 Our other bit of news is that Barbara and I bought an electric car for going back and forth between New Hampshire and Massachusetts. The car is totally amazing to drive and we love it. It was built by the same guy who builds the rockets that blow up. When we picked it up, we had to sit through a two hour orientation.  It is like learning to use “Windows 10”. It was expensive, but I did the calculations and it will pay for itself in fuel savings alone in under 108 years. I did not factor the likely cost of speeding tickets.
Posted by Warren at 1:11 PM 1 comment: