After completion of Cycle 1 on Dec 24, the doctors measured my M-Spike and it had dropped a good bit - from 3.02 to 1.61. Definitely good news. I reported that. However, they delayed the start of Cycle 2 for a a week  due to my having a bad cold. So they took another M-Spike reading a week later (Dec 31) and the M-Spike jumped to 2.11. That is large jump for a week. Very disappointing. I was concerned that the had stopped working after only one Cycle.

I was very anxious to see the results after completion of Cycle 2. I got those results on Wednesday (Feb 5) and they were good. The M-Spike had dropped to 1.27. This still a lot higher than we were seeing a year ago on the treatment I was on at that time, but we are still early in the CC-220 trial and we are hoping that the numbers continue to improve.

Meanwhile I am feeling pretty good. I have had much better energy over the last couple of weeks and that is important to me. In December, I was quite active in the morning, but generally just wanted to sit around in the afternoons. Lately, I have been active all morning AND all afternoon. That is great news.

The biggest problem has been leg cramps keeping my up at night. I have to get up every couple hours and walk the cramps out of my legs. I also sometimes get them during the day. The doctors tell me to drink lots of fluids and to take Magnesium and Calcium. I also had a theory that drinking was making the cramps worse, so I gave up drinking for a week. Yes - I know - drastic.  Fortunately, this did not seem to help. So I am trying a few other things and living with it. If I have to get up a lot at night, I can sleep later in the morning. It is not as if I have to deal with one of those pesky jobs to get up for.

I still have all the other side effects or whatever they are, but I am dealing with them.

Since I have had better energy, I managed to finish off the 7 Christmas ornaments I had been working on since early December. I am very proud that I got them done 11 months before Christmas this year. 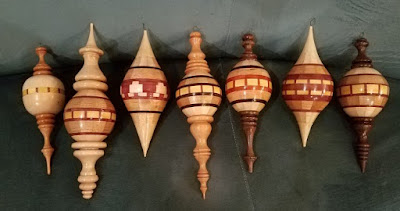 Some of the delay could have been due to an airplane model. Just before Christmas, I saw a B-17 model for sale on E-Bay. This one has a visible interior and since I have always been fascinated by this particular aircraft, I ordered it for myself.

This brought me back to my childhood. I recalled the thrill of looking at the photos on the box and thinking about how beautiful my model was going to be completed. I recalled the disappointment a few days later when I realized the mess I was making of the thing. I realized the folly of my assumption that I would be better at this than I had been as a 10 year old. I was certainly no better a painting lips onto a 1" tall figure than I had been. I ended up with a big glob or red covering the guys face. I also thought about what kids these days are missing by not building models- such as how to deal with disappointment - or how to recover from problems. For example, 50 years ago, the kid would heat a wire and put a "bullet hole" into the side of the plane and declare that the guy with the red paint all over him had been "wounded". I too got the chance to get creative. They did not include enough figurines to fill out the crew. There was a sitting ground crewman, so I decided to promote him to tail gunner. He fit almost perfectly - once I cut off his feet and left elbow.  What I loved about the model was that the side of the plane was made of clear plastic. Unfortunately, touching glue to any part of the "clear" plastic caused it to turn to "frosted glass". My airplane looks like the guys are trying to fly it from inside a steamed up shower.

In spite of all these failures, I am including a photo of the finished airplane. For reasons stated above, there is no close up. I took several photos and I am including the one that looks the least bad. 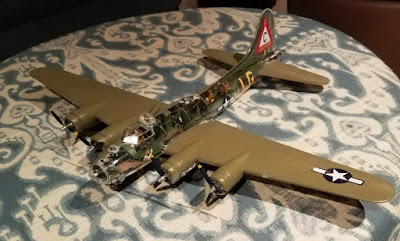 Meanwhile, Barbara continues to be a real trooper. My getting up several times a night can't be helping her sleeping and she has been putting up with my taking 40 Mg of Decadron once a week - which makes me hyper - more hyper even than "normal" Warren. She is also spending huge amounts of time as treasurer of Fox Hill Village just as we are borrowing millions for a major expansion.

So I am hoping that things health wise will be stable for a while. I will post another update next time there is something to report.
Posted by Warren at 3:58 AM No comments: