I went in for a chemo today and nothing has changed on the Cancer front so fortunately, there is not much to report there. But even so, it seems that some people like to hear about other adventures or - even better- mis-adventures. So I thought I would do an update so that I could tell you about my free travel trailer.

Let me start by saying that if anyone ever offers you a "Free" Travel Trailer, get your check book ready.

Short version is that for the price of one dollar, I was offered a 24' travel trailer that had been gutted and outfitted as a "man cave" for use on a promotional tour for a TV show. While it still has a kitchen and bathroom (sans toilet), it is no longer really a camper. 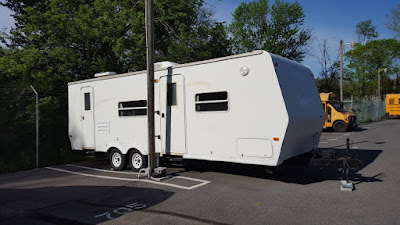 People have asked why I wanted this trailer. The answer is, "Because it was free".

So, they sent me the title for it, which I took to the town hall to get a plate for it. That was $200 or so. Can you imagine the government wanting money?

My brother then pointed out that I would need extension mirrors for my truck so that I would be able to see behind the trailer. $85 to Amazon.

Then I was talking to a friend of mine who asked me if my truck has an electric brake controller built in. He patiently explained that if you are cruising down a hill on the interstate at 65 mph and you try to slow down, it is not good if your trailer passes you. That was another $173.

Then another friend asked about a "Sway Control System". He explained that even if your trailer does not pass you, it is not good if it is swinging from side to side behind you bouncing back and forth against the two tractor trailers on either side of you. Another $212 to Amazon for a load leveling hitch and sway control system.

This came with a 2 5/16" ball, They told me my trailer expected a 2" ball. My neighbor and I had to use giant 18" plumbers wrenches with 5 foot pipes over them to get enough leverage to unbolt the old ball and put on the smaller one ($15). Later, I learned that the trailer in fact needed the original large ball and I ended up putting the big one back on.

Next I had to drive to PA (350 miles in each direction) to pick up the trailer. I combined this with great visits to friends from college and both brothers and their families, with Ken driving back to NH with me in case I got too tired during the 8 hours it took to get home. (I was fine). 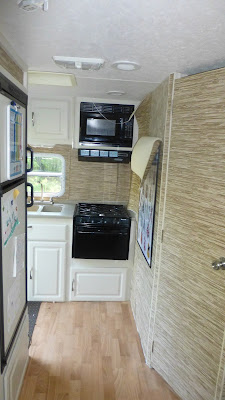 The trailer is now positioned on my 25 acres of land near where I collect maple sap. I have a gasoline generator / adapter cord connected to it. The A/C seems to work as does the fridge. The water pump has been ripped out, but it looks like it would be easy enough to replace. The heating system has been ripped out and all the vents covered up. The wallpaper is peeling off the walls, but will be easy to stick back up. One corner of the trailer has major water damage, but I think I have a plan to patch this with little difficulty.

One friend has kindly pointed out that this will be much like having another boat to take care of. He is totally right. Thank you, Alec, for that thought.

(By the way, the boat is finally in the water and seems to be running, though we have not been out in it yet. Haven't had time, what with the time I have spent working on the trailer. . . ) 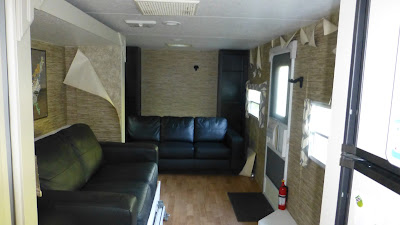 Now, the question is what to do with this. One possibility is to take it "RV Camping". I have suggested this to Barbara and let's just say that she could show more enthusiasm. But she has agreed that if I really want to do this, she will come along as long I select only campgrounds that are very close to a Ritz Carlton where she can stay.
Posted by Warren at 12:19 PM No comments:

Well, it has been a while since my last update. Fortunately, I guess, nothing really has changed. I am now in the middle of Cycle 36 with each cycle being 21 days long. I visit Dana Farber on days 1 and 8 so that they can do a blood test and give me a shot of Velcade. The visit itself is not particularly unpleasant since I get to chat with all my cute chemo-nurse friends, but going in to Dana Farber is a bit inconvenient, especially during the summer when we would rather be in New Hampshire enjoying the short summer.

My numbers are holding steady. Well, actually, they are dropping slightly, but they are still not quite as low as they were just before my bout in the hospital when then took me off of chemo. The side effects continue to be manageable. There are a bunch of small side effects that I barely notice, but the two worst ones are cramps and (how shall I put this delicately) "digestive issue".

The cramps occur mostly at night and mostly in my legs, though I sometimes get them in my hands and lower ribs during the day.

A month or so ago, my brother sent me a link to web site that says the solution to nighttime leg cramps is to sleep with a bar of soap. I think he was mostly being funny. I mean, really? Soap? It seems like they are actually suggesting that I go to bed with a bar of soap.

Well after a couple of pretty bad nights, I thought, "What the heck? It can't hurt to give it a try - as long as nobody finds out". So, I dropped a bar of soap into a sock (a clean sock) and put it into the bed. And I woke up at around 3:30 and thought, "I don't have leg cramps. And I have not been up three or four times. Could the soap be working?" Same thing the next night.

Since then, I have been sleeping with a bar of soap every night. Now, fact is that I still get cramps some nights, even with the soap, but it SEEMS like I don't get as many or as severely if I have the soap.

But here is the question: Is it the soap or is it my imagination or the placebo effect? Maybe I will try to come up with some sort of scientific test. Not sure how I will do it. Anyway, for now at least, I will continue my relationship with the soap.

Meanwhile, we have been enjoying the New Hampshire summer, and trying to get the boat ready to put into the water. I won't bore you with the details, but I have run into one problem after another. But I am firmly committed to getting the boat launched by Labor Day. Don't laugh. That is when the lake gets quiet and peaceful. Anyway, I think I am pretty close to working out the last problem or two.

Right now, I am in Westwood looking forward to a Dana Farber visit tomorrow. After that, I am heading down to Northeast Pennsylvania to visit my brothers and also to pick up a "free" camping / travel trailer which one of my brothers and I will tow back to New Hampshire. This is a somewhat long story and since the story is still in the first phases, I will wait until the next cancer blog update to tell you about it.

Posted by Warren at 5:33 PM No comments: