After a very slow start, summer finally arrived in New Hampshire. We had to wait until July for this, but the last couple of weeks have been spectacular.

I started this blog post while sitting in a Chemo chair at Dana Farber. I am now in the middle of cycle 70 (3 weeks each). Nothing much has changed - including the fact that numbness in my feet continues to increase, but very slowly. They tell me not to worry about that until I start to have trouble walking. Thanks a lot for that.

I have been concerned with my overall level of physical fitness. Other than now having insufficient endurance, there is no particular reason that I should not be hiking and bike riding. So I need to work on that. We have an old stair-master and I have spending a few minutes every few days exercising on it. I have a portable DVD  player, and I decided to watch something would be culturally enriching. I have started The Complete Works of the 3 Stooges. Amazingly, they are not as funny as they were when I was in Jr. High School, but the episodes are all the perfect length for a workout.

We are now back at the lake for the summer. One downside of that is having a boat. This year, I set the record for getting the boat into the water. And (miracle of miracles), I had it running by Memorial Day. To do this, I had to replace the starter. Twice. I am getting so that I can swap out a starter in about an hour. The boat now starts easily - first time every time.

Unfortunately, as soon as I put it in gear and tried to make it accelerate, the engine stalls. For a while,  it ran well enough for cocktail cruises. What else does one need? But now, even that has become a bit questionable. A friend suggested that it could be a clogged fuel filter. I took the old one out and went to local marina and bought a new one. Also, I bought a new boat. I should get it by the end of the week. (The boat - not the fuel filter. I already have the fuel filter.)

I continue to spend a lot of time making wooden bowls. Back in April, the people at Fox Hill suggested that I do a show of my "Art". Eventually, they talked me into setting up a display of about 25 bowls and other turnings. When people asked, "How much for this one . . ?", I started by telling them that I was not trying to sell them. Eventually, I relented and added a price list. Much to my dismay, almost everything sold. I was pretty excited about all the money until I realized that I had not covered minimum wage.

So, I am not working on building up another "body of work". I am rather proud of two pieces that I have recently finished. The bowl is 10 inches in diameter. The vase is 22" high. 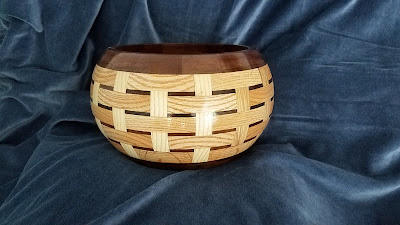 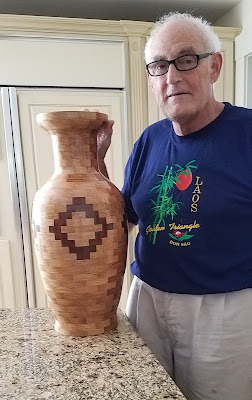 I do have one very sad thing to report. One of our cats disappeared several weeks ago. We assumed that she had snuck out when we were loading the car several weeks ago and got lost. Barbara and U had both spend hours walking and searching and calling. This morning, we discovered that our precious cat had hidden behind a desk and died. Very sad.

That's all for now. Enjoy your summer.