Our House did not Burn Down

Our house did not burn down last week. I mention this because there was a certain amount of doubt for a while. In fact, the fire department sent trucks to our house three times. Here is the story.

Last Thursday, we were in Westwood at around noon I got a call from the alarm company telling me that they had dispatched the fire department to our house. I called the Meredith Police, gave them codes to get into the house. We waited for 15 minutes for them to call back wondering if the reason they had not called was because they were too busy trying to save the foundation. When they did call back, they reported that the alarm had stopped and an interior inspection showed no indication of smoke or fire.

Fifteen minutes later, the alarm company called again. So did the Fire Chief who had returned to our house. They did another walk-through and left we called the alarm company and told them to put our account on "disregard" until further notice. Apparently, to the alarm company, that meant "4 hours" because:

As soon as we hung up from the alarm company, the chief called again from our house. I think I had me on speed-dial. Apparently, he and the other fire fighters were getting sick of visiting our house.

We managed to put the alarm on "disregard" for 24 hours and got the alarm company in there on Friday. They found water in one of the sensors and disabled it. I don't think I mentioned that we had a new roof put on the house in October and apparently it leaks. I am meeting with the roofer on Sunday.  I guess a house with a leaky roof is better than no house at all, so we should be happy.

Meanwhile, we have been spending most of our time in Westwood. But we did visit the NYC area around Thanksgiving to have the holiday meal with my brother. We stayed in a nearby place we found on Airbnb. This was great. Our hostess who was leaving for the duration of our visit was wonderful. She provided the codes for the keyless entry system. Which worked fine until the batteries in the keyless entry system failed. Fortunately, I was carrying the "emergency keys" she had also provided. We had a great visit and the entire Clark family was there. A rare treat and a good time was had by all because my brother had mandated a "no politics" rule for his house. Highly recommended.

Yesterday, Fox Hill Village talked me into giving a presentation on the web portal used by residents. For most of the presentation, there were six people watching and three of them were asleep - no exaggeration. This was my last such presentation.

Meanwhile, I have been spending a lot of time "bowling". I managed to finish my second segmented bowl. (A segmented bowl is made by gluing many small, carefully cut wooden pieces together.) Anyway, it came out looking pretty good - if you don't look too closely. 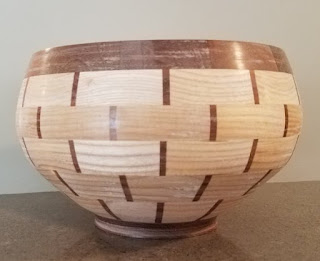 Oh - yeah. One other thing. This is a cancer blog, so I guess I should report on that as well. And the big news is: nothing new. Which is good. I am on "Day 8" of Cycle 42. In fact, I write this from Dana Farber while receiving a saline drip. All my numbers look good and the Velcade shot has been ordered, I should be out of here pretty soon.

Posted by Warren at 6:30 PM No comments: