It has been a few weeks since the last posting and I thought I would update the blog to let you all know what is happening.

The snow is almost completely gone and the lake is free of ice. Last week, our friend Jerry managed to gather up 23 gallons of maple sap for us and I am boiling it down now. We should get  a couple more quarts of syrup, but that will be the last of it. Then it will be time to clean up the mess all this has made.

Mostly, I am feeling pretty good lately - especially my back and ribs - which probably means that the bones are healing a bit. I am still not allowed to lift heavy things which is frustrating, and I am not yet chainsaw certified, but this is progress. I have many small side-effects from the chemo, but none are too bad and they are too numerous and boring to detail. I do get tired easily and seem to need lots of sleep. My "brain to mouth barrier" (never strong to begin with) continues to weaken. Also, I am VERY sensitive to the sun. I burn easily; it takes a long time to heal and does not turn into a tan. And this is April. July should be interesting.

I am on a "break week" from chemo which means that I only had chemo on Monday this week. We had a meeting with the Dana Farber oncologists on Wednesday. This included another complete set of blood tests - even though I had had a set with my Hookset oncologist on Monday. Fortunately, all the numbers looked pretty good - including the IGg which is the one that has been giving us trouble, so that is good news. The plan is to continue with chemo cycles - which means two weeks of chemo followed by a break week. For us this translates to two weeks where we spend Monday afternoon to Thursday morning at "Fox Hill Village" in Westwood with stops for chemo in Hookset on the way from Meredith and back. On the "rest week" we have chemo only on Monday, so we will most likely return to Meredith and skip Westwood on that week.

Fox Hill Village is interesting. They have a group picture puzzle set up on each floor. I already got chastised for "being too good at puzzle making". Barbara is starting a Mah Jongg group. She has also hired a designer/decorator for the apartment. I don't see the point. We already have a TV, a bed and Internet access. What more do we need? Perhaps men are not meant to understand these things.

One really good bit of news: I asked my oncologist if it would be OK for me to have a glass of wine on days when I am not getting chemo. He did not see any problem as long as I do not drink on chemo days or the day before or the day after. You can imagine how excited I was to hear that. But when I worked out my actual drinking days, it comes to 4 days during every 21 day cycle. Hey - its better than nothing. I prefer to think of the glass (or in this case, the "wine glass") as being "half full" rather than "half empty". .
Posted by Warren at 2:56 PM No comments:

Barbara and I are back in Meredith after a few days at "Fox Down Abbey". We had two rounds of chemo in Hookset this week - one on Monday and then again today on the way back. This is what we expect will the pattern for a while. In general we have two "chemo" weeks followed by one "rest" week. During each "chemo week" we will have chemo on Monday and Thursday - and go to Westwood for the days in between. On "rest weeks", we will go to Hookset on Monday and then come back to Meredith. This week and next week are chemo weeks.

So far, the numbers from the blood tests look pretty good, so it seems like the myeloma is responding to the chemo - at least for the time being. At this point, this is all we can ask for. In a couple or few months, they will see what happens if they stop the chemo. If the disease has been driven into "remission", the numbers will stay good for a while even without the chemo. If this happens, they will do an autologous stem cell transplant. That is what the doctors are "keeping their fingers crossed" for. Us too.

Meanwhile, Barbara and I have been talking to designer / decorators for the place in Westwood. We are still pretty much camping there, but yesterday marked a transition when we had a proper bed delivered. The sleeper sofa that we had purchased for the unit was quite comfortable, but the bed is better. So, we now have a couch, a bed and a 65" 3D TV connected to the Internet. What else could we ask for?

Meanwhile, I have been feeling pretty good. I am still a member of Meredith's Zoning Board of Adjustment and attended the monthly meeting tonight. I am spending time in the workshop building a desk for use in Westwood, but I have a long way to go on that. But most important is that it is Sugaring Season here in New Hampshire. Anyone in the area will tell you that this is very high priority.

To understand what home sugaring is all about, I recommend listening to Funny Sugaring Poem. It is 13 minutes long, but really funny.

Fortunately, I am happy to report that my Maple Syrup Evaporator Invention has been working quite well. Barbara says it looks like something that Rube Goldberg would come up with if he were trying to cook soup in a toilet. But I don't care - it works extremely well. I plan to share the design with other Maple Syrup makers and I have posted a detailed description at Maple Syrup Evaporator.  Here is a photo. When the sap level gets low, the copper ball drops down and pulls down on the lever. The lever lifts up on a switch (that you can barely see in the photo) and turns on power to the gray outlet box. To the right of the photo (not shown), there is a sap bucket with a small pump in it. The pump is plugged into the outlet box, so it pumps sap through the light green tube into the sap boiler until the ball floats up and turns the switch and pump off. 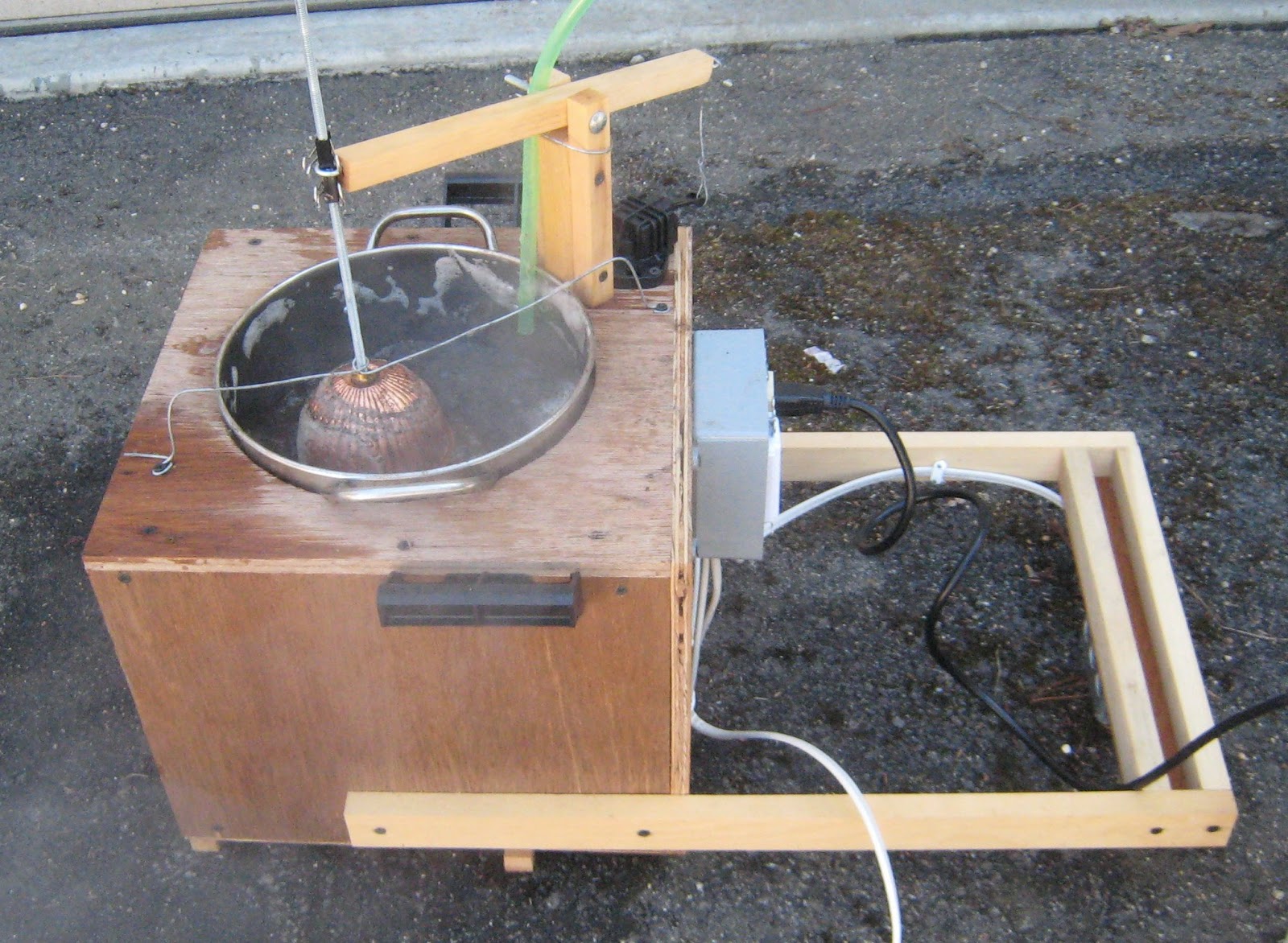 There is still quite a bit of snow in the woods and I have needed a bit of help in hauling the sap out of there. My friend Jerry has been great about going up there and bringing the sap out. Barbara has also gone in there with me and hauled sap out. When I go up to the "Sugarbush", I have to wear snow shoes to keep from punching through the deep snow and I have to limit what I carry to a few gallons at a time. I think sugaring season might be almost done and it looks like we will end up with about a gallon and a half of syrup - which means we will have had to haul and boil off about 60+ gallons of sap.

So that is the summary of how things are going here. We are tired from all the driving, but we are holding up well enough and we are certainly ready for Spring.