On the Road Again

The drug is called Melflufen. It sounds like one of those funny names they come up with for Viagra, but the drugs are not related - at least not as far as I have noticed so far.

Apparently, there were a bunch of tests I had to pass before to qualify for this clinical study. I passed them all.

I also had to get something called a "port". They insert this thing under the skin on your chest. 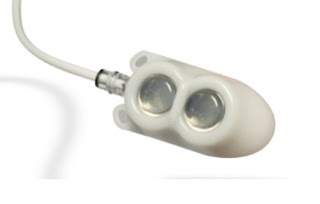 As you can see from the image above, I was lucky enough to get a "2-Holer" (medical term). Then when it comes time for treatment, they don't have to stick a needle into my arm. Instead, they stick the needle through the skin on my chest and into the "port". They tell me that this is better. The only advantage I can see is that the nurse has a bigger target for the needle. The other reason is that the Melflufen can damage the small veins in my arm. With the port, the chemical goes into the large veins around my heart. Is is better to damage those?

They installed the port about a week and a half ago. This went smoothly, except that they told me that I did not have to stop taking my blood thinner. Therefore, for the first several days, the bruising got worse every day. I ended up with "PTSD". (Purple Tit Syndrome Disease).  Eventually, I stopped taking the blood thinner on my own. I wanted to stop the bruise before it got all the way down to my navel. Once I stopped the blood thinner, the bruising started to fade.

Still, having this thing there sort of gets "under your skin". Well, actually, it is under your skin. But it doesn't hurt, so it is not a problem.

So, the next question is side effects. When the doctors talk about this, they say that "usually side effects are minimal". But then when you read the disclosure form, it scares the crap out of you. It talks like things like anemia requiring blood transfusions, etc..

So, here I sit in the chemo chair at Dana Farber waiting with bated breath for my first shot of Melflufen to show up from the pharmacy. I will let you know how it goes.
Posted by Warren at 1:14 PM No comments: