It has been a while since my last update. Not much new to report. My numbers continue to hold reasonably steady and I continue to tolerate the chemicals reasonably well. My feet are still numb, I still get cramps at night and I continue to user my share of Imodium. But none of these are major issues.  Last week, I did have a bad cold for a while. I ended up sleeping for most of several days, but I am all better now.

As I said, it has been quite a while since the last update and much of my time (while not sleeping off my cold) has been spent working with engines or vehicles with engines.

Let's start with the boat. We don't use it enough and the gas goes bad. At least that is why I think it would not start when I wanted to drive it over to the launch ramp to pull it out for the winter. Fortunately, our friend John was there to help me try to get it started. He was also first to notice when the boat caught on fire. We managed to blow out the fire after a few minutes and it only burned a little bit of hair from the top of my head. After having tried for a half hour to get the boat started, I was sorely tempted to just let it burn.

We had much better luck with Barbara's new car - which we are still getting used to. It is like driving around inside a computer. The problem is that it is all software driven and they sometimes update the software. Well, just as we were getting used to the old software, they updated us. This caused the dashboard to look completely different. For example, the speedometer went away.  It is sort of like going to your computer to find that it is suddenly running Windows 10, except that you are not using Windows to control a vehicle traveling at 70 mph.

This new version says that the car will drive itself. You know me. I love technology and I was dying to try it. (Poor choice of words?)  Does it work?? You bet your life it does. (Oops - more bad word choice. )

Actually, it does mostly work under the right conditions, the key word here being "mostly" and "right conditions". It works pretty well on a not too crowded interstate with road lines clearly visible. It slows down when you come up on another car and if you signal left, it will change lanes and go back to the set speed. Pretty cool. But you do have to really pay attention to what is happening and be ready to grab control back if you are coming up to a situation that you don't think the car will handle or if the car does something weird.It is also great in stop and go traffic. But still it takes a lot of courage to actually allow the car to drive - especially the first time you try it.

All this was a lot easier than the third vehicle I had to deal with. I purchased a slightly used, 45 year old PassePartout vintage snow machine.

Admittedly, this violated a bunch of my "rules to live by":
I struggled for days trying to get that stupid thing running.I rebuilt the carburetor several times after carefully cleaning it each time. I did research and found old manuals on line. I came very close to taking a sledge hammer to it and smashing it to smithereens to see if that would help it start. Eventually, I took it to someone who got it running for a hundred bucks.

Which meant that it would go forward and backward, but it would not turn. Well, actually, it would rotate counterclockwise, but only if stopped and shifted into reverse. Attempts to turn while going forward caused it to jam to a stop - which was good because the brakes didn't work.

Eventually, I got it so that I can steer it and the machine is pretty cool even though  the brakes still don't work very well. I took it up into the woods and it drives over anything - as you would expect of a small tank. But there is one more problem. The exhaust seems to get vented into the cockpit and the cockpit seems specially designed to hold it there. However, all in all, it seems like it will be a lot of fun and I think it will work very well for gathering maple sap. Depending upon how long I can hold my breath to avoid breathing exhaust. 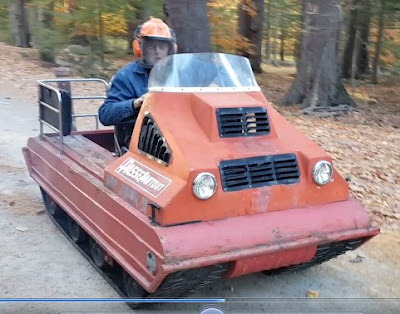