Sugaring Season is Over

Well, it looks like maple sugaring season has come to an end. No more excuses for not updating the blog.

Last cycle I had a cold and it pretty much wiped me out. Mostly, I just wanted to sleep all the time. When I wasn't sleeping, I was coughing and that made my ribs hurt. On top of that, I had very little endurance. I would get tired and out of breath just walking around. I guess that is what happens when you have a cold on top of a compromised immune system. Or maybe I was wiped out from the antibiotics that my doctor prescribed for me.

In spite of that, I took a trip to New York City for a visit with my brother and his wife. There was also a technical seminar that I wanted to attend that was only a block from their home, so that was my excuse for heading south. Hopping on the train is very easy from Fox Hill.

I came back here in time to tend to my "sugaring". Much of this consisted of finding new and innovative ways to get my tractor stuck.

Last year, the snow was really deep and caused problems. This year, I had plowed a nice wide path all the way to the trees as well as a loop around them. Since I was tapping more trees, I did not want to be hauling buckets of sap through deep snow. I wanted to drive the tractor close to the trees to make my life easier. This turned out to be a real learning experience for me.

What I learned is that it is incredibly easy to get a four wheel drive tractor horribly stuck in mud. And there was lots of mud. Every place I plowed turned to mud. Every time I drove over the road I had plowed, the mud got deeper. And the tractor would get stuck. Mostly, I could claw myself out with the backhoe, but that didn't get me any closer to the trees.

Fortunately, I had another plan. In addition to the larger tractor, I also have a small mower / garden tractor with a trailer. I figured I would put the sap buckets in the trailer and pull that round for my sap gathering. I figured that since this is much lighter than the big tractor, it would not dig into the mud as deeply. Also, I put chains on the real wheels to get additional traction. 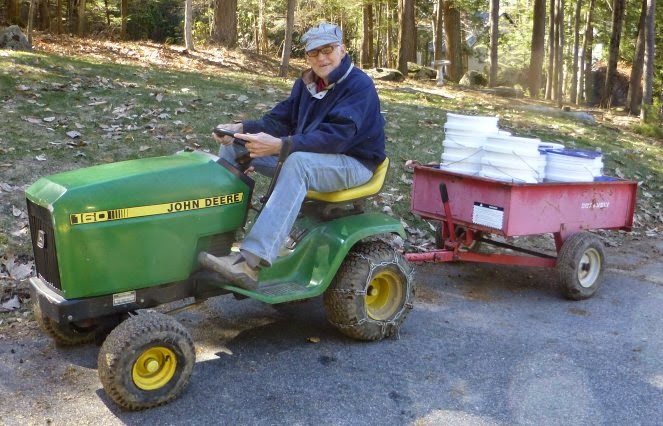 That tractor got stuck worse than the big one.  I was ready to leave it there until the middle of summer, but my friend Jerry went in an pulled it out for me.

But then Jerry drove his 4x4 down one of the muddy roads and got it stuck. I wasn't there, but he tells me he it took him an hour or so to get it out.

Even so, Jerry and I managed to pull about 200 gallons of sap out of the "sugar bush" and boil it all down to Maple Syrup. I ended up with about 5 gallons of syrup. This year, I added 4 more sap boilers and during peak boiling, I was drawing about 16 kilowatts. Barbara almost fainted when she saw the electric bill. And that was only for the March boiling. I hope I am not home when she gets the April bill.

My technique still has me doing the last bit of boiling on the kitchen stove. This year, the sap on the stove only boiled over twice and only set off the fire alarm once. While attempting to clear the "fire" part of the alarm, I accidentally set the burglar alarm without knowing it. I soon had the alarm company calling me about both the fire indication and the burglar indication while all the time, the alarm was blaring. Barbara was not home for this last boil-over and I am not planning on telling her about it.

So we are now getting ready for Spring. Most of the snow is gone from the yard and the ice on the lake is beginning to melt and should disappear within a few days. We are definitely ready for warm weather, but it is not here yet. We are still keeping the fire going in the wood stove.
Posted by Warren at 12:43 PM 2 comments: