Based on the feedback from yesterday's update, I have learned that what my faithful readers really care about is Barbara's new shoes.

So, therefore, by popular demand, Barbara agreed to model them for the camera. Here they are: 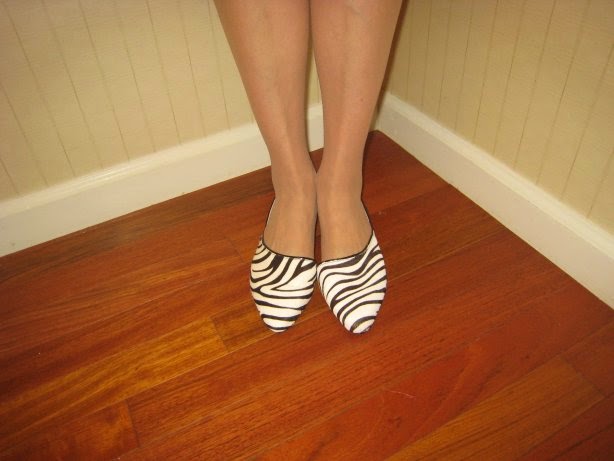 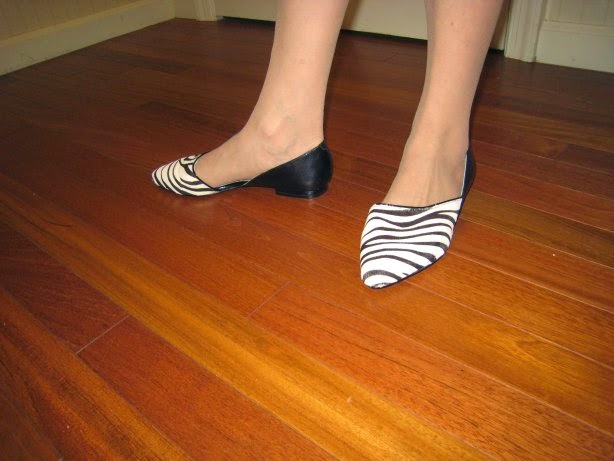 As much as I hate to admit it, they are really cool.

A Day of Chemo

Yesterday, we spent the day at Dana Farber (DFCI). I will start by reporting that the doctors seem pleased with our progress and the way the numbers are running, even though they didn't yet have the numbers from yesterday's labs. We are now starting Cycle 5 of what they tell me will be a total of 8 cycles. Each cycle is 21 days which takes us to the first week in December.

Mostly, I am still feeling pretty good, though I was pretty tired during my "break week" which was last week. No real complaints though.

Meanwhile, this cancer thing is quite time-consuming. Our objective at DFCI was to get a shot and an infusion. Sounds simple enough, right? We left Meredith at 7:45 and then again at 8:15. We finally got to Fox Hill Village at just after 6:30 PM. What took so long??

First, we left the house right on schedule at 7:45, figuring 2 hours plus a half hour margin for traffic. When we got to the center of town, I remembered something that we needed, so we turned around.

OK - so if you must know, it was my "24 hour urine collection" required on day 1 of every cycle. So we went home and started over. We then ran into two accidents and a another big traffic jam getting into Boston. Barbara dropped me off out in front of DFCI - with my "special" bottle and I registered for "labs". I was 40 minutes late - the first time we had ever been late. Not that it mattered.

Which did not happen yesterday. The lab took my blood samples (and the special bottle) after 35 minutes of waiting and we were up for the next appointment at 11:30 which was for an EKG (scheduled for 11). We talked them into holding off on this so that we would make our 11:30 appointment with the doctors. We then waited 3 1/2 hours for the doctor who talked to us for 5 minutes.  And that was the early doctor. She approved the infusion and other drugs.

The rest of the day was very efficient - at least the DFCI portion. (Things often get very efficient as we get close to quitting time. Imagine that.) Anyway, after a minimal wait they brought me into an infusion room, hitched me up to a saline IV which is the longest infusion (60 mins). Simultaneously, they brought in the EKG machine and tech - 3 EGKSs over 10 minutes. Soon after that, the pharmacy delivered the Zometa, so that added that to the infusion (20 minutes) and then gave me the Velcade shot. And then the second doctor dropped in to say, "Hey, Warren - you are doing great. The numbers are great. Everything is Lovely". We left there at around 5:00 PM - rush hour in Boston - which amazingly was not too bad.

All that was left was a quick trip to the drive-thru prescription pickup at the CVS on the way to FHV.

Which was not to be. We got there at 5:30 and sat in the drive-thru for 50 minutes - blocking other customers for most of this time. It seems that they had the pills, but they could not enter them into the computer and it violated "policy" to give me the pills before entering them. After a half hour, I asked the Assistant Manager why they could not give me the pills and deal with the computer later. She said that they would be fired for violating policy. I very carefully and politely explained that if she did not have the authority to approve deviation from the policy that she would call her manager at home to see if the store manager had authority and if not to call the district manager and then the regional manager and all the way up to the president of the company if necessary. She asked me if I would like to wait inside and we told her that we were going to wait right where we were until we got the pills - even if it took all night. By this time, the line of cars behind us was around the corner behind the store.

Anyway, we had the pills 5 minutes later after signing a standardized form that nobody in the store had previously seemed to knew about.

So that was our day. I did get a lot of reading done.

Also, after all that, I almost forgot to take the drug last night.

So last night, and for the next two nights, we are staying at Fox Hill Village - in the guest suite. This is very nice, but not as nice as having our own place. Our apartment is still totally torn up and looks much the same as it did 2 weeks ago when we were last here. The difference is that the wiring is now mostly done as is the plumbing.. This morning we had the "electrical walk through". We did find a couple of things that they had missed. They seem to be on schedule and my guess is that sheet-rock will be starting to go up soon.

Barbara used the afternoon for a trip to Designer Shoe Warehouse - ostensibly to "return" a pair of shoes. She only bought only one additional new pair which makes the trip quite a success from my perspective - less so from hers. But I have to admit that the shoes she bought are pretty cool. I am thinking that maybe it is time for me to develop a foot fetish.

Meanwhile, I went down to the FHV workshop to try to make a bowl. And I did - well sort of. It was coming out to be my best bowl yet, but then I sort of created a defect. See if you can figure out what is wrong: 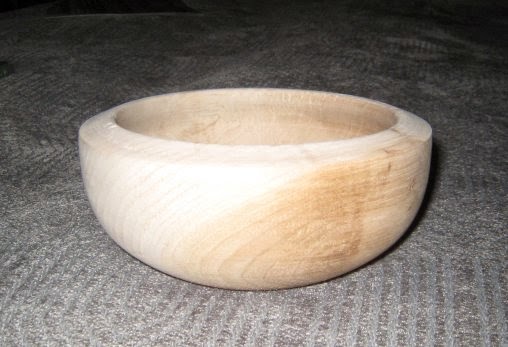 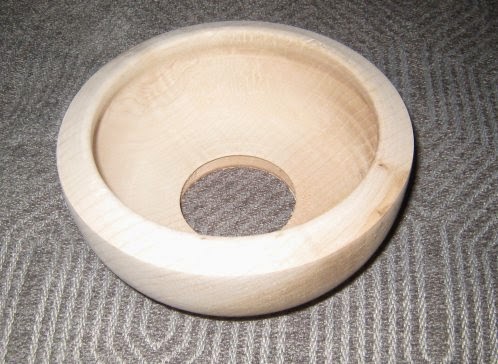 Yup - you saw it didn't you. That teentsy little hole in the bottom?? It turns out that the best way to hold a bowl onto the lathe is to cut a round slot in the bottom. I have a tool that grips this slot and attaches to the lathe which allows you to hold the bowl by the bottom while you hollow it out. Well, I sort of forgot about the slot and the clamp and was hollowing out the bowl when suddenly, the clamp appeared in the bottoma. Not good. So, Now, I am trying to figure out what to do with this "thing". The leading candidate is to make a spindle for the bottom and turn it into a goblet for holding candy or nuts or something like that. Please let know if you come up with any better ideas.

As I start to write this blog on Friday afternoon, we are sitting in a guest apartment at Fox Hill Village. We are no longer allowed to stay in what was formerly our unit 271. It has been mostly gutted. Barbara and I are still speaking to each other.

Well - first the cancer update. We started a new cycle on Wednesday - which meant a whole slew of blood tests - not that I really care how many samples they take once the punch the hole in my arm. I keep hoping that maybe the Medieval doctors were on to something with their blood letting that modern medicine does not yet fully understand. Anyway, the numbers continue to come down - though slowly. The clinical trial nurse said that she thinks this is better than having them come down fast, because then they tend to go up fast. Let's hope she is right about that.

The one thing that I noticed since the last blog is how lively I have felt. I don't know if this is a chemo side-effect or if the cancer has been knocked down or what, but I have enjoyed being very active. Of course, I am often totally wiped out at the end of the day, but I really don't mind that.

As I mentioned above, we are kicked out of our FHV apartment during extensive renovations. It looks like we will be out until sometime in very late November. For this week (Wed - Sat), we are staying in the FHV guest suite. This allows us to have our meals here (since we are still on the meal plan), to use the FHV workshop and to see some of our FHV friends.

It also allows us to visit what's left of our apartment - which is not much. But it is good to go in there and see where the walls are going to be. And also to change our minds about where we want them. The construction guys have been pretty accommodating - so far at least and our adjustments so far have been minor. It is interesting that other FHV residents seem more interested in seeing the apartment torn up than ever were interested in seeing it prior to start of renovations. 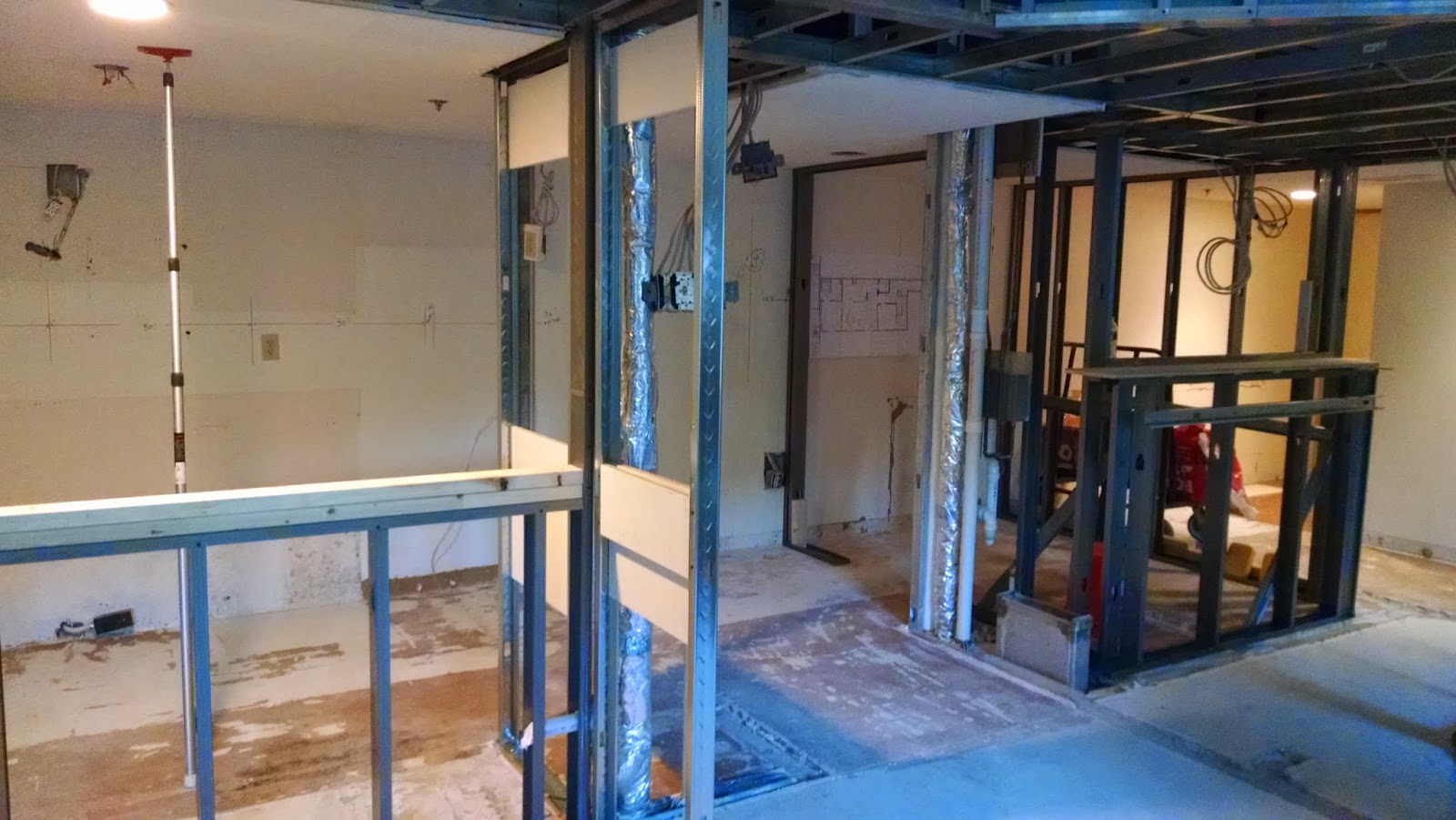 The down-side of this is the frequent meetings with the designer and visits to showrooms. Barbara is really into this. Let's just say that I am less into it. I enjoy visiting the unit and talking with the construction guys. Barbara enjoys visiting showrooms.

Last week was a chemo "break week" and I used it constructively. In fact, I rented real construction equipment - a full sized CAT 311 Excavator. What a blast. As I kid, I always loved playing in the dirt, and this gave me a chance to do that "big time". There was a field on the land I bought a couple of years ago that was covered with stumps and large boulders. I used the excavator to clear and smooth it. There are also roads going through the property - some of which loggers had created last year and others that they had destroyed. Anyway, I did repairs on some of the roads, thinking that they would be easier to use without giant stumps in the middle. At first, the excavator was a bit of a challenge to operate, but I got used to it after an hour or so. I did partly tip it over a couple of times, but managed to recover just in time. That was exciting. I tried to get Barbara to help with the operation of the excavator, but she was not as interested in it as I was. 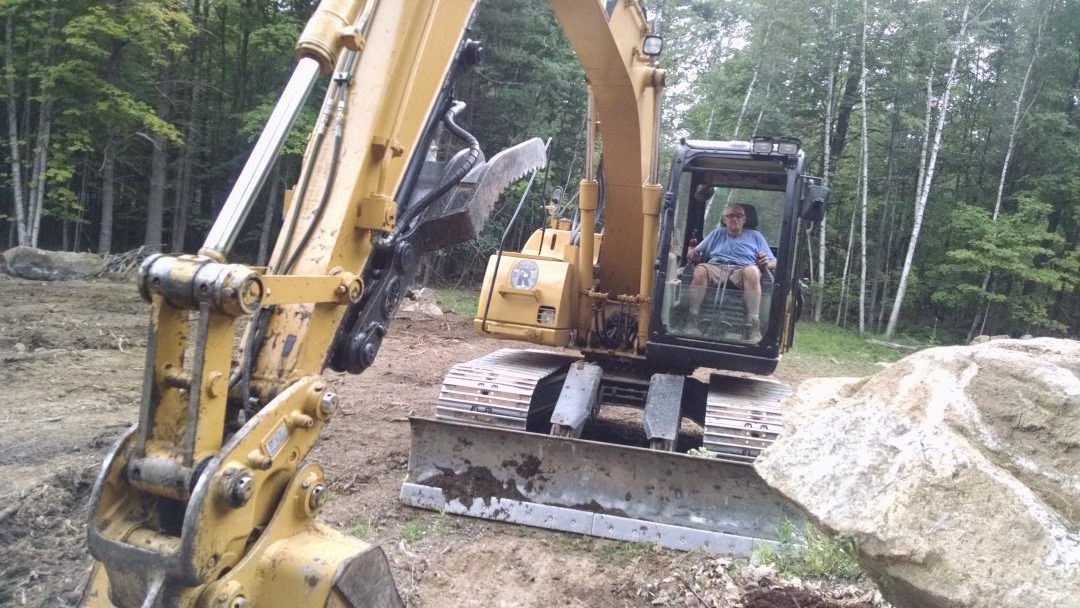 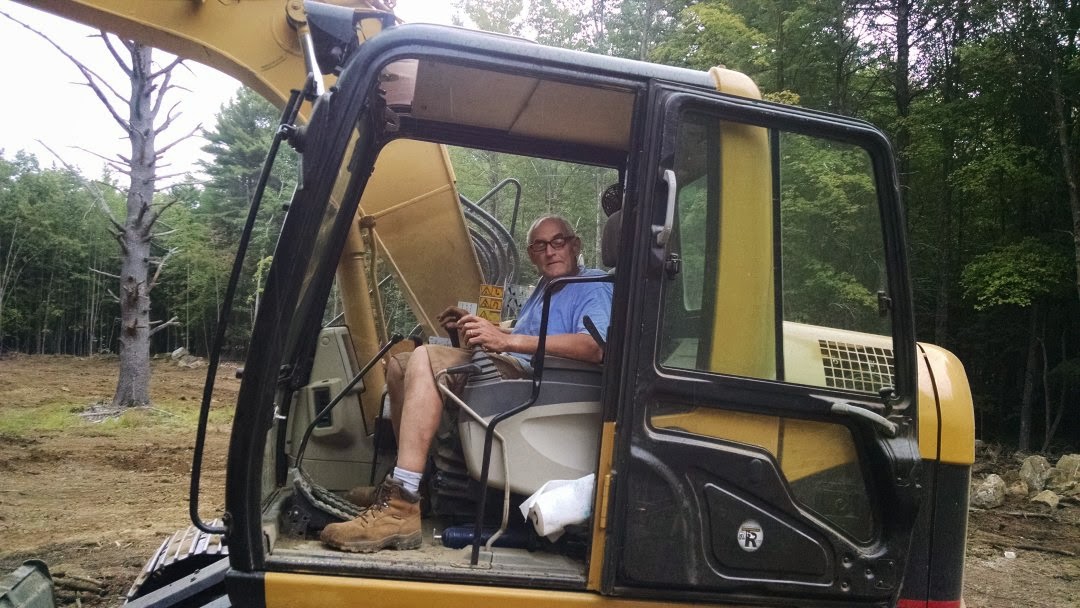 My other new activity is that I have always wanted to make wooden bowls on the lathe, so I have taken a couple of lessons from a guy who lives near Fox Hill Village. I am just now getting started with this and will report in the next blog update after I have made more progress - assuming that I actually manage to make more progress. We'll see.
Posted by Warren at 5:58 PM 1 comment: